In September the plan was to knit three pairs in three months – one in September, October and November, leaving December free to do more Xmas-y things … well the road to hell is paved with good intentions so here I am at the end of November with two pairs complete and one still to knit in December. Artificial deadlines are just not the same as proper external ones.

Still, the pair I’ve just finished have turned out rather nicely, I’m hoping that they fit well too. I’m showing some pictures of them with one or two ends waiting to be darned in – that can be done at any time though without daylight or any superhuman effort.

(Brief aside). Mentioning daylight, I have just bought a Luxo work lamp. As my eyes get worse and the days get darker, I need more and more light to see what I’m doing – that’s true for hand and machine knitting and any sewing – in fact more or less everything apart from gardening and doing yoga. Some while ago, I was given a Luxo light from an architect’s office that no longer needed them – it’s all on screen now. I have since bought another two Luxos – in addition to the rather ancient Habitat one (red) and an IKEA one (purple) attached to various tables. So wherever I am in the house, I’ve got a well lit spot. Luxo is the light that is dancing in the famous animation at the start of Pixar films, in case you didn’t know (I didn’t either) but they are lovely lights, very stable and not too industrial looking. I prefer them to the Anglepoise which I checked out while in London a week or so ago.

So with my knitting deadline a month late, on Monday 30th November I tried to get them finished. The first picture shows them in the morning and the second one at the end of the day – actually early Tuesday morning. So in the day I knitted three fingers and started the first thumb. That wasn’t non stop by any means – I did other things as well and while I was knitting I listened to the Zola adaptation on Radio 4 (harder than you might think while knitting gloves). 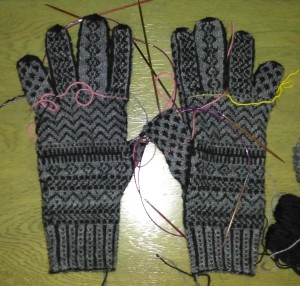 Late evening Monday, all fingers present and correct and the start of a thumb 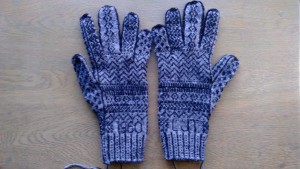 The completed gloves, in need of ends darning in and a press

A note about the patterns – they are all Faroese taken from an actual Faroe jacket in the KCG Collection or a book of Faroes patterns in the KCG library. Most of them have a float of 5 stitches, one more than ‘allowed’ by Elizabeth Zimmerman, but meaning that the patterns often use multiples of 3s and 5s and are therefore really easy to work.

On to the next pair. I wonder if I should be knitting anti war mitts like Lisa Auerbach??