This pair is the first of my own design. I started from scratch with the design and used simple textiles – Welsh striped flannel – as the inspiration.

Well the vertical striped gloves are complete. I don’t like them and I’m not sure why. I’m not satisfied with the way they’re knitted, too many uneven bits, and I think they look mean rather than modern and restrained. Perhaps it’s the yarn? I had planned a group of these, exploring different design ideas but I’m rethinking now. 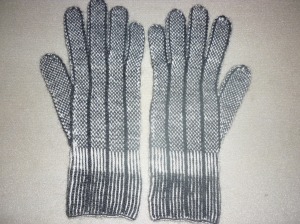 I have been trying out different finger ends and not finding that any of them are perfect. I’ve settled for a very sharp decrease round and then yarn through stitches to finish. The last round is knitted in all dark so as to look neater. They have both been knitted on a small sample piece so the yarn with the stitches for the rest of the round is at the right of the image.

The finger rounds were knitted on 2mm needles and I’m wondering if the whole thing would be better on those? Neater and less uneven? The next pair I will knit the dark as the left hand colour and the light as the right hand as it is so difficult to control the tension on the left had. Robin Hansen is good on this subject in her book on Maine mittens.

I’m well on with the fingers now and pleased in general with how the gloves are looking. I’m also starting to think about the next pair that will follow on from these… I am wondering whether just to alternate the panels of vertical lines and seed stitches or if it needs anything more? I also want to try other colours but had planned that these would be a series of dark grey and ecru so am sticking to that.

Palms with some fingers

Someone did it before me!

The vertical stripe pattern seems almost too simple and I have been wondering if it’s the right thing to do. However, I have been lent a Scandinavian book about knitting mittens and there are some in that with the very simple pattern.

The pattern is also given in Fox and Geese and Fences, Robin Hansen’s collection of traditional Maine mittens (1983) as Striped Mittens, p 42, but Robin Hansen states that the pattern is less popular (than others) ‘maybe because the sharp lines emphasise any mistakes the knitter might make’.

Certainly any variations in tension and also the yarn show up and mine are not perfect. 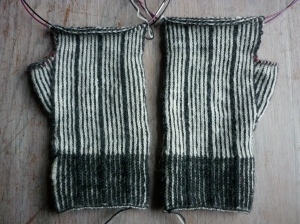 Up to the thumb, back of hands

Up to the thumb, palms

I decided to make these gloves so that the thumb is increased from the side seam. It’s what Nanette Blanchard calls a sore thumb as it sticks out (like a sore thumb). I don’t really like the name so I’ve called it a side thumb.

The pattern varies on the front and the back, see below. 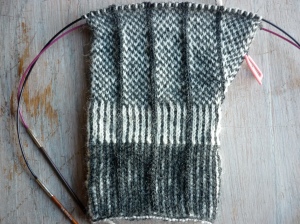 Palm side with thumb

Back of hand showing thumb

These are the cuffs of the vertical stripe gloves. The ribs are double in places so that the lines go up to the fingers correctly. 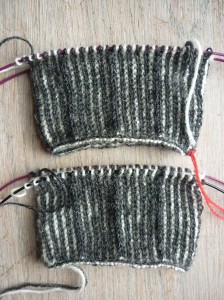 I cast on for a new pair of gloves to my own design. I started yesterday and had to re-do the cast on and first few rows as I’d used the wrong side of the cast on. Grrr.

This is the cast on: 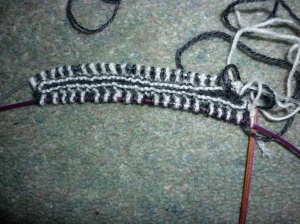 The cast on is a Mary Allen one, in two colours. Then I knitted the rib with columns of two dark grey stitches marking out where the fingers will come. It took a lot of working out to get the ribs and the stitch numbers correct.

I am trying out design ideas using full scale drawings, left in background, smaller templates with designs drawn on and print outs from Intwined studio, bottom left. Then it is a case of knitting and seeing what they look like. I have a sample piece using a practice rib from a long time ago.

Trying out stitch patterns. Comparing the print out with the knitting