The completed gloves, washed and pressed 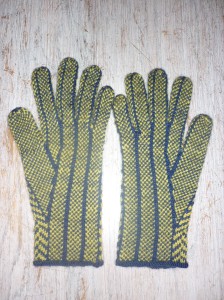 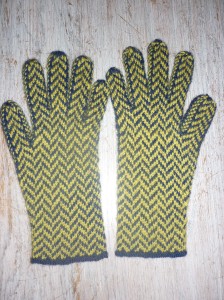 These are now finished apart from having a wash and a good press. I think that the pattern is really striking and I love the way the lines go up the palm and split for the thumb. The thumb is shaped asymmetrically. They are also much easier and quicker to knit than the 3 ply gloves, the smaller number of stitches means less knitting at all stages. 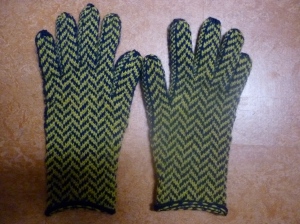 I’m re-doing the finger ends on these gloves as they were too long and I didn’t like the way they were finished. I’ve now done decrease 3 sts six times round to give 6 sts at the tip. I then turned the finger inside out and cast off the 6 stitches together. I’ve still to do it on two other fingers but need better light and/or specs so am waiting for the morning. Then I can knit the thumb and one will be complete. I need the shorter needles for the second glove.

PLUS, have started a small sample of the grey and cream own design ones but need to do a bit more before I can judge how it’s turning out and whether to carry on with it or not….

Here’s the herringbone gloves as they are today. The right one is finished apart from darning in the ends. The left one is waiting for the fingers.

I’m pleased with these so far, they fit well and look good. I especially like the palms with the strong lines demarcating the fingers. The curl at the cuff will have to be dealt with, I’m not quite sure how until I try to do it – crochet or a little cast on edging perhaps?

I really want to get on with the sample for my own design gloves in cream and dark grey. I need to see how my ideas drawn on the rubber glove look when knitted.

PLUS, have started a small sample of the grey and cream own design ones but need to do a bit more before I can judge how it’s turning out and whether to carry on with it or not….

The herringbone gloves are coming on, although at a glacial pace. I’m also only knitting one which is making me think that I should cast on the second one so I make sure I do actually knit it.

I’m also bothered about the amount of curl on the cast on. This can be seen on all the pictures and I’m not sure how I’ll cure it – I will try the old faithful of the crochet crab stitch and a hot press with a wet cloth first of all. I was not able to read the Japanese instructions for the cast on so there could have been something there that I’ve missed.

The fingers are coming on well, apart from the fact that knitted to the number of rows in the pattern they are too long for my fingers. I want to undo the tips anyway as I’m not quite happy with the way they’re coming out if done according to the pattern. I like the fingers though with the four lines of single stitches separating the pattern elements and I think I will use this on my own designs.

The little finger on this pattern is started 4 rows below the other fingers and I have followed this, never having done this before. I’m not sure if it’s neccessary or not. 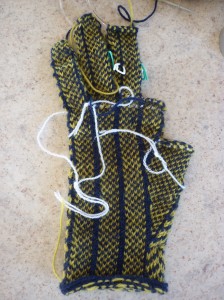 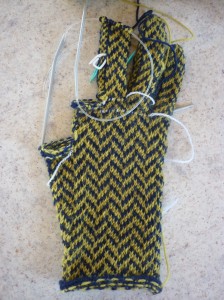 So this is what I’ve done so – just the one glove, but have the needles and yarn ready for glove number two. Still not my own design but useful to knit this different configuration of fingers and patterns.

I’ve just come back from three weeks in the French and Spanish Pyrenees, trekking. I have to travel light but I make space in my rucksack for a small knitting project. I took the wool, needles and instructions for the Herringbone pattern gloves on the Tata web site.

I tried blogging from my mobile but it is quite clunky and signal and wi-fi were sporadic especially as we moved into the higher mountains.

So this is what I’ve done so – just the one glove, but have the needles and yarn ready for glove number two. Still not my own design but useful to knit this different configuration of fingers and patterns. 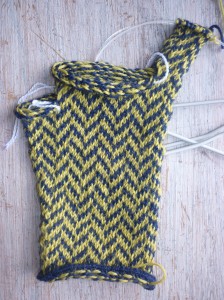 Herringbone gloves, back of hand 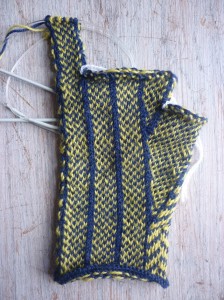 The first 16 rounds completed on Eurostar. 4 ply and 3mm needles quicker than 3 ply. Only 64 stitches instead of 90. 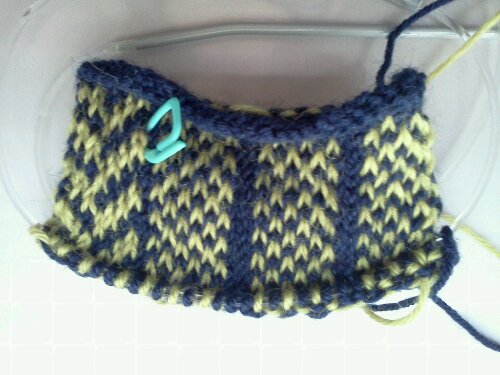