A while ago I bought two crochet blankets from a vintage shop in Huddersfield. They are both large, generous double bed size and nicely made. They were a lot of work for someone and are in a variety of mainly synthetic yarns, which does mean that they can go in the washing machine easily.  One is mainly red and the other mainly purple. I have had them in the house on the wall, the red one at the top of the stairs and the purple one on the landing where they looked pretty striking. They hang well on metal picture hooks one in every square onto the picture rail. However, they’ve made the journey to our caravan in the far west of Wales where they are now brightening up the rather beige sofas. Here they each are with a closer shot of the square too. 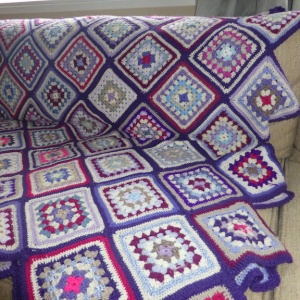 I’ve made several granny square blankets but over the last 10 years or so I’ve had a crochet blanket on the go in rows of double crochet (single in the States I think?). The idea was to use up a large bag of wool yarns, mostly left over from my Knitwear Design Master’s course, which I completed in 1986. So the continued existence of this yarn was and is a testament to whatever mothproofing it has had, and to the fact that I rarely throw anything away (especially yarn).

This blanket was supposed to be my ‘easy’ making – that I could do when chatting to friends or perhaps in the car and so on. It started life in small sections, some of which were plain, and some striped and then got added to in a purposely random fashion with a strip down either side of plain blue indigo and so on.

My work in (very long) progress

The design inspiration came from several sources, including a piece o West African Kente cloth that was brought back for me and a crochet blanket seen on the bed at a friend’s house when staying overnight. I really wanted the overall look to be lively with not too much neatness and order and I think that I have achieved that, although the individual stitches are properly formed. I took the time to sew the side strips onto the main central block while I was in West Wales last week, where the days seem longer, and now I’m ready to finish it off with an edging down the sides and then one last stripe of bright red all round.

If you’ve read this far, thank you and best wishes for a lovely festive season.