I’ve finished another pair. These are for my friend Steve. I’m pleased with them as they are a new departure because they have been knitted in three colours after I ran out of the green wool. I could have bought more but it seems important to use what I have already.

Now I’ve got to make some decisions about what to do next. 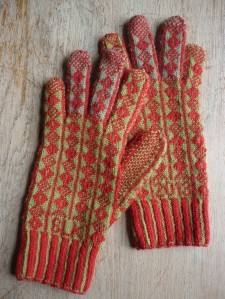 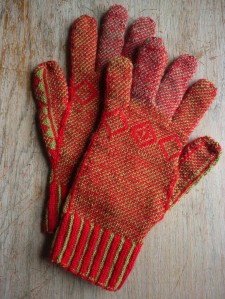 Running out of yarn

I’ve run out of the green yarn for the latest pair. I could order more as it is a new yarn (Marion Foale 3 ply) but I have so much vintage and other stuff it seems stupid to do so. So I have knitted the first and little fingers, this person’s hand outline indicates that the middle fingers start a bit higher up, and the middle two will be knitted using a different green. 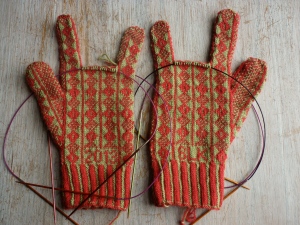 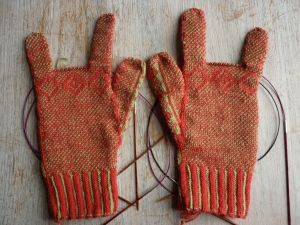 And the real feature is the diamonds on the palm of the hand. Could be soles of shoes, but no.

The yarn is running short on this pair of gloves so I’m knitting the thumbs, then the fingers first, second and third and then using a different green for the little fingers (called pinkies in the States – why??) if by that time I’ve run out. I weighed the knitting and the needles and the yarn and it all came to 64 gms while the last pair completed weighed 60 gms so it’s going to be tight. There’s nothing like running short of yarn to get  speed up, a bit like in the car when you think you’re running out of petrol, you want to go faster to get to the next petrol station sooner.

Making the thumbs a slightly different colour is good as this friend has a really crooked little finger, it really shows on the outline of his hand that he drew at New Year. I also like the idea of finishing a glove with a yarn that I have already rather than buying more – I now have a lovely stash of vintage 3ply wools and wool mixes.

Here they are with the thumb stitches on the 40cm circulars and ready to go:

The palm has some larger diamonds across above the thumb as a small homage to the original ones in the Scottish Museum, seen below. 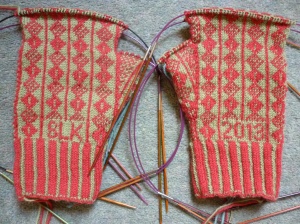 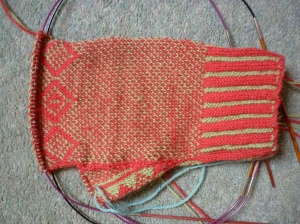 Up to the thumbs 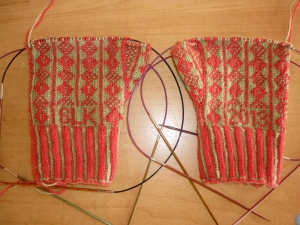 After I cast the cast pair on, I made good progress on the cuffs and the name and date round the wrists.

Here they are. Now I’ve got to get on with the thumbs but I need to have the chart in front of me for that as I have to increase on alternate rows and I can’t do that in my head. Pathetic! 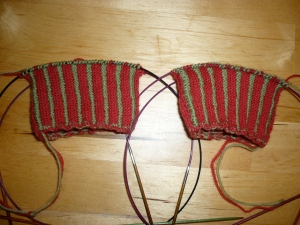 Cuffs for the latest pair 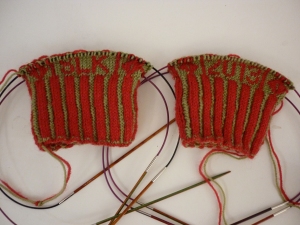 A new pair cast on:

As it says above, I have cast on a new pair today. They are for my very old friend Steve and are inspired by the pair in the Museum of Scotland that look like this: 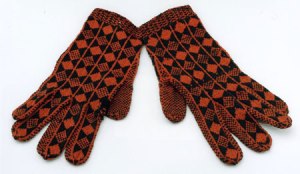 They will be in red and green though as he chose these colours when he drew round his hand in the new year. There are going to be bold diamonds and geometric patterns as he has visited and worked in South Africa and other parts of Africa a lot, and these patterns make me think of there. 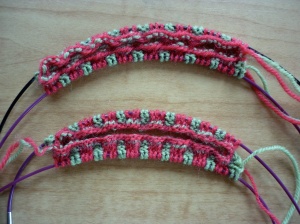 Actually the top one was pulled out almost immediately as it is too untidy – it is a sort of Mary Allen cast on but without so much twist -the bottom one is a German twisted cast on and comes out much neater and has hardly any curl. I use instructions on You Tube these days as they are so much easier to follow than a book.

The yarns are a vintage Lister 3 ply pure wool from the Knitting and Crochet Guild stash, red, also used in the Prince of Wales pair, and new 3ply pure wool from Marion Foale, green, used in Clare’s pair and Hil’s pair.